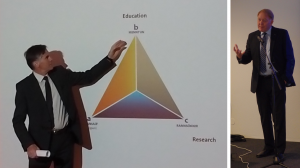 The 2014 Annual Progress Conference of the Chemistry and Molecular Sciences and Technology Domain took place in the Icelandair Hotel in Keflavik (Iceland). CMST Delegate for Iceland and host of the meeting Guðmundur G. Haraldsson (right) gave a warm welcome to meeting participants and an introduction into the sciences in Iceland.

Hallgrimur Jonasson (left), General Director of the Rannís Icelandic Centre for Research (Reykjavik) introduced the basic principles of funding research in Iceland by explaining the Rannís Knowledge Triangle of research, education and innovation.

The group of 32 Action chairs presented progress and highlights in the Action and had intense discussions with their fellow Chairs and the Rapporteurs of the Chemistry and Molecular Sciences and Technology Domain. The CM1104 Action Chair reported on highlights in science and collaboration from the last year. A breakthrough in understanding sub-surface ordering of oxygen vacancies on the reduced CeO2(111) surface could be obtained in a collaboration between scientists from Madrid (Spain), Sanata Fe (Argentina) and Osnabrück (Germany) while scientists from Prague  (Czech Republic) and Erlangen (Germany) revealed stunning phenomena in the reduction of ceria thin films and introduced ionic liquids as novel agents for functionalising reducible oxide surfaces . Based on the STSM of Vera Mansfeldova, scientists from Prague (Czech Republic) and Vienna (Austria), succeeded in the most difficult controlled preparation of well-defined anatase titania surfaces and their high resolution imaging with scanning tunnelling microscopy what is now established a standard procedure. The CM1104 Chair further reported on the prosperous development of the Action in general and the great success several members had in acquiring large research funds based on Action results.

At the end of the meeting, participants could catch a glimpse of the spectacular Island landscape, culture and geothermal energy conversion including a visit in the Blue Lagoon.

This website uses cookies to improve your experience while you navigate through the website. Out of these, the cookies that are categorized as necessary are stored on your browser as they are essential for the working of basic functionalities of the website. We also use third-party cookies that help us analyze and understand how you use this website. These cookies will be stored in your browser only with your consent. You also have the option to opt-out of these cookies. But opting out of some of these cookies may affect your browsing experience.
Necessary Always Enabled

Performance cookies are used to understand and analyze the key performance indexes of the website which helps in delivering a better user experience for the visitors.

Analytical cookies are used to understand how visitors interact with the website. These cookies help provide information on metrics the number of visitors, bounce rate, traffic source, etc.

Advertisement cookies are used to provide visitors with relevant ads and marketing campaigns. These cookies track visitors across websites and collect information to provide customized ads.

Other uncategorized cookies are those that are being analyzed and have not been classified into a category as yet.