The science of surfaces and interfaces, which examines structural, electronic and reactive properties, grants nowadays an increased interest in insulating substrates. The archetypes of these are oxides. Indeed, they are ubiquitous, either in the environment or in manufactured objects, not least by the fact – desired or not – that most metals oxidize in contact with the atmosphere. The importance of oxides is also due to the number of scientific fields in which they are involved. And it is not only the traditional areas such as catalysis, microelectronics, optical, thermal or mechanical coatings, but also earth sciences, environment and life sciences. 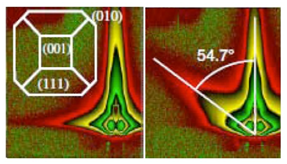 GISAXS patterns recorded during the growth of Ag/MgO(100) with the incident beam in the [010] (left) and [1-10] (right) directions – The intensities are represented in simulated colours – Obtained from GISAXS analysis, the top view of the particle with a cubo-octahedral shape is represented on the left.
C. Revenant, G. Renaud, R. Lazzari et J. Jupille, Phys. Rev. B 79 (2009) 235424

Oxides substrates are highly specific, both because of their nature and the conditions in which they are encountered. A wide range of properties is related to their stoichiometry: structure, stability, insulating/conducting state, magnetism, chemical or catalytic activity, color, toxicity. Their interface with water, often involved in their synthesis, determines their acid-base character, contributes to their functionalization and rules dissolution/precipitation phenomena. They are often in the form of thin layers or divided materials and in contact of gaseous or liquid environments in normal conditions.

Our interest is directed toward the atomic and electronic structure of surfaces, synthesis and modeling of low-dimensional oxides, growth, wetting and adhesion of supported metals, hydroxylation and hydration, model catalysts and dynamics of nano-objects.